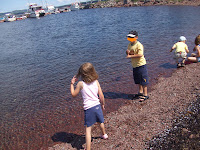 Two Ontario youth were spotted skipping rocks while on vacation in rural Newfoundland.  Their parents, originally from Newfoundland, who cannot be identified in order to protect their children's identity, apparently support this unstructured, non-technology based activity.

"I spent my childhood on the beach skipping rocks and jabbing beached jellyfish with sticks" said the father.  "There was no internet.  There was no year-round soccer programs.  While some of my co-workers back at the nuclear plant may frown upon such activity, I think it's just fine".

The young boy stated "I seen jellyfish on my Nintendo DS before.  I didn't know they were real and I got a rock to skip six times.  That is sick, man".

Parent groups in the children's home of Pickering, Ontario are incensed at the depravity of such activity.  A spokesperson for the Pickering Parents Association for the Assimilation of Children says "I don't know if kids exposed to salt water and sea life should mix with my well-heeled kids.  Jellyfish are gross.  Don't they cause scurvy?".

The young girl added "Daddy and Mommy are taking us to the old dump tonight where they would turn off the car lights, then wait for a while and then turn on the lights and watch the rats run around.  This is the best holiday ever!!"